I just had a slightly terrifying realization:

In less than six months, I will be 40 years old.

I say “slightly” because I’m not exactly obsessing over it.  In actuality, the realization I had was really the first time I had thought about it since I turned 39 last December.

Still, though… the number alone is daunting.

Forty years.  Why does that seem like such a huge number?

So yeah, it’s a lot to process (and I apologize if my math is bad– I’ve never been great with math).

This Friday marks one month since I started my return to the gym.

And so far, it’s been going pretty well.

I think I could be doing better, though.  I’m only going about 3-4 times a week, and that’s good for now.  And I only started weights in the third week, after meeting with the trainer.

However, last week was a complete washout.  I fell ill with a mild case of bronchitis, and that put the kibosh on any gym activity.

But today I’m ready to get back on the horse, so to speak.

I’m not noticing any physical changes yet– although the second time I did my upper body routine, I did like the way my arms looked. 🙂  Let’s hope that continues to improve.  I’m tired of having needles for arms.

AND– the last time I weighed myself, I noticed I had dropped about 7-8 pounds.  THAT felt great!

Thanks for all the words of encouragement… it means a lot!! 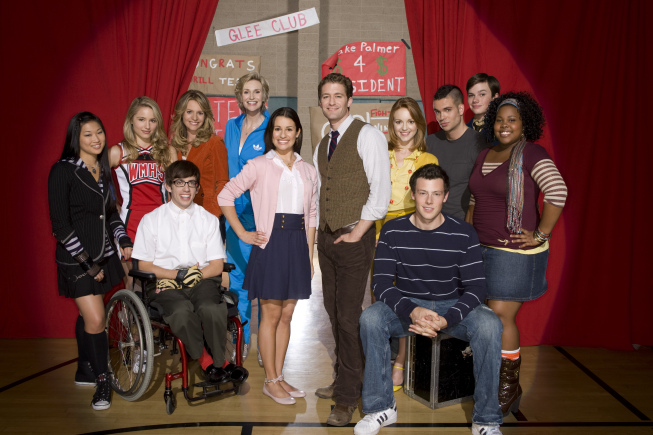 My friends, family and acquaintances will not be surprised by the confession I am about to make.  In fact, they’re probably sick and tired of hearing me talk about it.  But I’m going to talk about it anyway.

There, I said it.

First of all, I can’t believe this show has only been on for one season.  It’s  become such a staple for me and my friends that I feel like it’s been on for years, not just mere months.

Second, when I look at the number of songs this cast has performed in its first season, it astounds me.  Never mind the fact that they are over-produced (a problem many people– myself included– have with the show); the fact that this cast has performed, in one form or another, 137 songs in its first season (a herculean feat for ANY group) makes me only further believe that they are THE hardest-working cast on TV right now… or of all time.

I love the show because at its center are a cast of characters from which I can find a part of myself at any given time in my life.  And they all share the same common bond– the love of music.

Diversity in casting is fairly commonplace these days, but while some shows show diversity while still presenting “beautiful people,’ “Glee” went a step further.

“Glee” made it a point to showcase the outcasts: the kids who were the brunt of jokes and the recipients of teasing and sometimes torture by other kids.  The ones who look different, sound different, and sometimes even move different from everyone else.  Into that mix, it threw in some of the “cool kids” – the jocks, cheerleaders and otherwise “popular” ones who had higher places on the social hierarchy.  Would they co-exist and still create music together?  Or would they throw everything down the tubes?

In the season finale, we learned that everyone who joined the Glee club had grown considerably since the first episode– from students to teachers to counselors.  The revelations by each of the characters showed that the story we had been following had made a difference in each of their lives– and the difference that was made was due, for the most part, to the common bond they shared– music.

In each of these characters, I saw a part of myself– both when I was their age and today.  I found myself relating most to, of course, Kurt– for his awkwardness and self-discovery; and to Tina for her shyness and newfound ability to make friends.  I also related to Artie, who, although he is wheelchair-bound, never lets that be a barrier.  Will Scheuster’s starry-eyed hopefulness was familiar, as I have often found myself to feel that way about situations– only to be disappointed in the end.  That’s not being Debbie-Downerish– that’s just being real.  Not everything is bright and shiny and wonderful.  And Will’s discovery throughout this show’s first season proved that.

Then there’s Sue Sylvester– the snarky, vicious, hell-driven antagonist.  There were times I thought the character was a bit too much– but there was always a method to her madness.  Sue could have been a completely one-dimensional character, but the writers didn’t let that happen.  I always hoped we’d see her other side, and the episode where she visited her sister with Down Syndrome did just that, and beautifully.  And in that moment, the caricature that we had seen since day one was crumbled.  Sue has a heart.  Everyone has a heart– we just don’t always show it.

Of course, the show is not perfect.  There were some major clunker episodes in the course of the first season, and a few times where the fantasy aspect of the show got way out of hand.  I’d love to see a touch more realism in the next season– but not TOO much.  The fantasy aspect of the show is what makes it fun.  After all, it’s not just a comedy or a drama– it’s a MUSICAL comedy-drama.  A MuDramEdy.  I just coined a phrase.

So now the show is done and us “Gleeks” are left to watch our DVDs and listen to our soundtrack MP3s until the fall.  Will the anticipation of Season 2 pay off?  I hope so.  Until then, I’ll relive some of the best moments and enjoy my summer.

So yeah… It’s been a long time since I last posted something here.

But I’ve been pretty busy for the past few months.  Busy with work, chorus, family… and busy with myself.

You see, ever since I moved last year, I have been slowly and steadily fixing things that I didn’t like about my life.  And when I say slow and steady, I MEAN slow and steady.  These things don’t happen overnight, you know.

For instance, I finally opened a savings account– and actually started putting money INTO that savings account.  That’s huge.  I haven’t done that in years– especially those years when I was living in my old place.  It isn’t much yet, but I’m hoping it will grow into something I can use for– I don’t know– a trip?  Maybe even a long vacation?  That’d be really nice.

I’ve also been paying off some long-standing debts that have been hovering over my head.  I still have a few to catch up with, but I feel like I’m in a better place now than I’ve been in a very long time.

But the biggest changes have been with myself personally.  No, I’m not dating anyone (yet), but I finally decided to stop being a lazy ass and do something about my physical health.   I joined a gym.

It’s taken me over ten years to muster up the will to do this again.  My first foray into the world of physical fitness started in about 1995 when I was still living in Kenosha.  I had joined the local Gold’s Gym (which it isn’t anymore),  formulated a really good plan, and stuck to it for almost a year.  By the time I moved to Chicago, I was down to 190 or so pounds, and was really starting to show the effects of my efforts.

After moving to Chicago in 1997, I joined a Bally Total Fitness club.  Big mistake.  First, the club I joined was in the River City complex downtown.  I’m still not 100% sure why I went there, but I was a traveling sales rep at the time and I was never stationed in one particular area; so I could easily drive there any time I wanted.  The problem was, I let them rook me into the most expensive contract they had, which cost me a fortune.  I think I was paying something like $100-120  a month, and on top of that I hired a personal trainer.  HE was great– well worth the money — but I don’t know WHAT I was thinking getting sucked into that deal.

Well, as luck would have it, I lost that job about a year later, and I wasn’t able to afford that astronomical monthly fee.  I tried (and tried) to get out of it, but I was locked in for at least another year.  I was so upset with Bally that I just stopped going altogether.  When I finally paid off the membership, I told them to shove it and quit completely.  My love affair with fitness had ended.

In the ten years or so that passed since then, a lot has happened in my life– the most significant being the death of my father.  His passing was a wake-up call for me.  He wasn’t born with diabetes… he contracted it due to his lifestyle.  And after the diagnosis, he let himself go.  He went from weighing over 250 lbs. around the time of his diagnosis to over 450 at the time of his death.

So … I’m doing this.  And it’s not easy.  It’s hard work.  There are days I have to drag myself in.  There are other days where I look forward to it.  Thankfully I’ve done this before, so I know what to expect… but I really want this to work.  This may be my last chance to make a difference for myself.

I’ll be blogging about my progress here.  Since I haven’t been blogging much lately, I figured this was as good a reason as any to resurrect the old Launching Pad.  Might as well make use of it, right? 🙂

Welcome to the world through my eyes - essays, photos, videos, thoughts, and reflections. My Launching Pad. Get ready to blast off at any moment.