Take a look at the above photograph. Take a good, close look.

Click on it if you want to, and get an even closer look.

This photograph was on the front page of Monday’s Chicago Tribune.

At this point I could ask you to write your own caption to describe what is going on here. Go ahead, think of one. Got it? Good.

Now read the actual caption that accompanied the photograph:

Now tell me, dear reader… WHAT is newsworthy about this photo?

But wait… there’s an accompanying ARTICLE about this historic event to boot!

The article basically states, in far too many words, that this warm, loving couple are bringing their baby into the world and will make sure that baby is a Chicago Bears fan. It’s a part of an ongoing series of reports called “Bears Watching: Finding diehard fans wherever they are,” that the Tribune has been publishing since the Chicago Bears started winning a lot of games.
I can’t help but wonder if articles such as this are actually in jest, or fully, completely, serious. Take, for instance, this paragraph:

“Normally on a Sunday, Bruce, an Elgin resident and lifelong Bears fan, would have had to listen to the game in the car during a break from his job at a firearms company. Instead, he was continuing, in the hospital, the Ford family tradition of watching the Bears play.”

The next paragraph raised my ire even more:

“‘The Bears are spanking the 49ers right now, which is good. I don’t have to worry about concentrating on them. I can concentrate on her.’ Ford said Sunday afternoon as he stroked the hair of his wife, Glenda. “I can concentrate on welcoming a little Bears fan into the world.'”

Oh what a sweet, loving, and generous husband you are, Brucie. What a wonderful precedent you are setting for dads all over the country. How nice you put your concern about the Bears BEFORE that of your wife. How nice that this has been published all over the city… state.. and probably country.

I am happy to report that the baby was born just fine and healthy. They even printed a picture of the bouncing baby boy on page 13 (how lucky for them!) Of course, however, his dad barely made the birth, as is evidenced by this later paragraph from the article:

“With about 11 minutes left in the game, the score was Bears 41, 49ers 3. But 2 was the number that Glenda Ford was keeping up with: her contractions were two minutes apart. ‘The Bears have 41 points. It’s over. This game is over.’ Bruce Ford said, as he turned his head away from the TV and toward his wife, who had just been seized by a wave of contractions. ‘Take deep breaths, deep breaths.'”

Take another look at that picture, folks.

It’s right there in glorious color– evidence of the end of civilization as we know it.

Better start preparing for it now.

A great animated ditty that is sure to bring back a memory or two.

Question is… did they ever think that maybe… just maybe… there might be another type of connotation to “Polishing the I”? Hmmm…. 🙂

Somewhere, up in Heaven, my Dad is doing a very happy dance.

I hadn’t been sitting in my chair at work yesterday for more than two minutes when the phone rang.

It was my sister, with some very good news.

See, my sister and brother-in-law have been trying for quite some time to have a baby.  They’ve been married since 2002, and decided to wait on having kids until they got settled into their marriage and respective jobs.  My sister has always been one to plan things out sensibly… very unlike me, of course.

Unfortunately, though, they have been unsuccessful with their attempts to have a child.  Initially they thought something was wrong with her– which was further cemented when she was diagnosed with Celiac Disease last year.  But after further research into the situation, they determined that HE was the one with the problem.

Meanwhile, my cousin had her first child a couple years ago, and my sister felt the pressure mounting.  They desperately wanted a child.  My parents (and his) wanted grandchildren.  And I, not to be left out, wanted to be an uncle.

So, after trying everything else they could possibly think of, they decided to try to have a baby in vitro.

Naturally, this is a very expensive, and potentially risky, undertaking– but they were willing to take that risk. And coming from catholic families, It could potentially be highly controversial… but they both wanted to do this so badly that nobody in the family objected with the method.  In fact, we all supported it completely.

Yesterday’s phone call was the culmination of months of tests, meetings, trips to doctors, and procedures.  They were able to draw over 12 healthy eggs from my sister and a healthy sperm sample from my brother-in-law, and of those samples, were able to fertilize up to 10 eggs.  They implanted two of these eggs on the weekend of Oct. 14 and froze the rest.

And yesterday the tests were shown to be positive.

So my sister is going to be a Mom.  My mom will be a Grandma.  And I will be Uncle Rick.

Naturally we are excited, but with a dose of cautious optimism.  It’s still early, and anything can happen.  We also don’t know if it’s one baby or two– or more.  There is always a possibility that one of the eggs could split and become identical twins.  But for now we know that there is at least one healthy baby developing inside my sister… and for that we are very, very thankful.

And with my Dad up there, pulling his strings and (probably) hounding the saints and angels to make this work… it will be a success.  Naturally we wish he could be HERE to enjoy this with us… but it’s comforting to know that this baby has a big guardian angel already.

So keep your fingers crossed for us, too.  We need all the good luck we can get.  I’ll find out more in about a month… and I’ll keep you posted!

This is probably THE most hilarious sketch ever produced on Sesame Street.

Ernie wakes up Bert to find out what time it is… in the middle of the night. So instead of turning on a light to see what time it is (this must have been before lighted alarm clocks, perhaps?) he comes up with an absolutely ingenious –and hilarious– way to find out the answer.

I guarantee you will laugh your fool head off at this one. 🙂

Before I begin… no, I’m not joining a cult or getting all “Dungeons and Dragons” on you. I just couldn’t think of a unifying theme for today’s show, and the first thing I saw on iTunes was “Magic to Do” from Pippin and “Magic” by Olivia Newton-John. So that’s the show’s title explained. 🙂

That aside, today’s show is dedicated to (more) apples and apple pie, and a very special segment– my review of  “The Pirate Queen.” 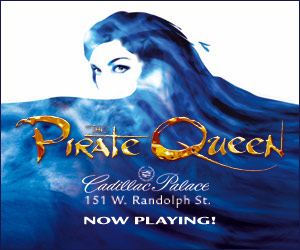 I promised you a review, and here it is… and you have to listen to the show to find out how I liked it. 🙂 Sneaky eh? 🙂

Drop me a line and let me know what you think.. did you see it? Do you agree with my statements? Or will you just wait til the thing opens on Broadway to find out how you like it? Share!!

Have a great weekend everyone. I’m off to the north!

Magic: Olivia Newton-John | Back to Basics: The Essential Collection (iTunes)

Welcome to the world through my eyes - essays, photos, videos, thoughts, and reflections. My Launching Pad. Get ready to blast off at any moment.